Yesterday I went to the Erickson Collection to both see the inside of the B-25 (I think I’m gonna call her Fifi, due to having Fifinella on the side…that story will come later) and for the 99’s monthly meeting, which was a campout at the FBO since Erickson naturally has a connected airport.  Hard to have planes that get flown places without an airport.  For the aviation nerds, here’s into on Sierra-tree-tree (S33 in aviation-speak, and my god, I can’t say Sierra-tree-tree with a straight face…it’s Sierra-three-three to me): S33 on AirNavS33 on AirNav.

Madras Municipal Airport was originally Madras Army Air Field, built during WWII as a training location for the B-17 Flying Fortresses and the Bell P-63 Kingcobras, which I admit knowing nothing about, other than the US Army decided not to use it, though Russia made use of it.  The north hanger of the airport, where the Erickson Collection is now housed, is on the National Historical Landmark registry.

To get into this thing, you actually have to open it carefully.  A plane may be hardy, but it can still break.  You MUST support the hatches when you push the lever to open them, and then support them when lowering them.  The bottom rung isn’t meant to hold weight for more than a few moments.  So you have to step quickly up to the next rung.  I will get more pics on Thursday.  The opening itself is surprisingly narrow.  I’m not sure how on earth full-grown men were able to get into and out of this thing without hurting their shoulders.  I’m not a large woman, and I still bonked myself.

The inside is tight.  Honestly, a Cessna 150 feels spacious in comparison, and that’s saying something since those planes are notoriously tight to the point that men over 6’0” are better off in a 172.  But it’s interesting to know what almost all of this is.  Very, very, very bizarre.  A few months ago, I’d have looked at this and been like…huh?  And now I know. Though I don’t know the purpose of the dual heading indicators unless that’s just redundancy.  I’ll ask my CFI on Monday, and if he doesn’t know, then I’ll ask on Thursday. 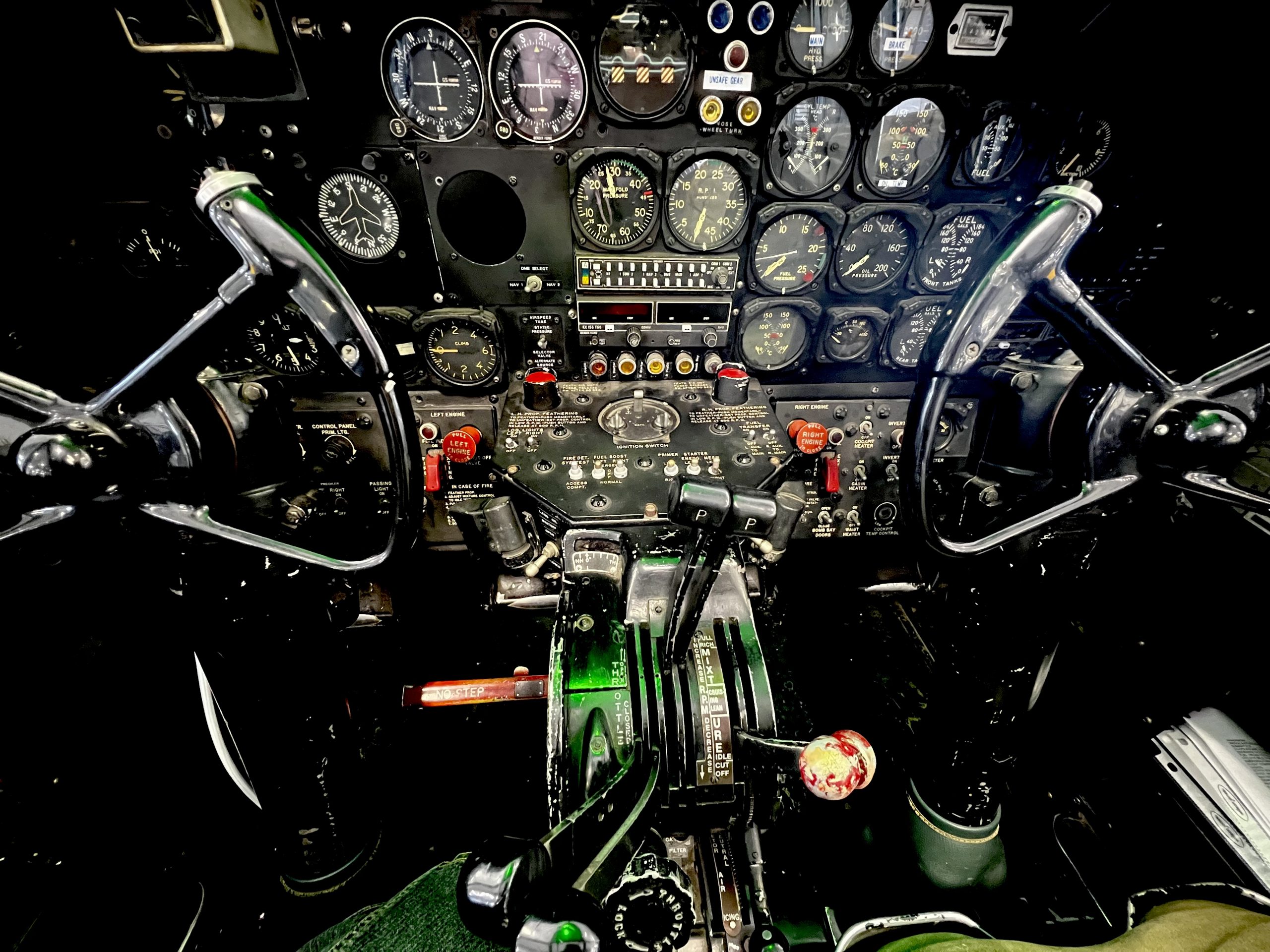 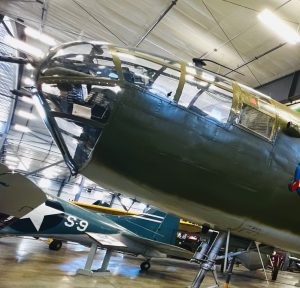 Getting into the nose, aka this thing on the right, is a bit tricky, not because it’s hard, per se, but because the fit is tight.  There’s a vent-looking thing that is narrow, and it’s not very high, to crawl through.  It’s easiest to get through it by doing a sort of plank where your elbows are bent, then crawling through with straight legs while on your hands and toes.  But the view in the air would be amazing, and I anticipate spending a lot of time in the nose listening to Titanic music.  I’ll have to use some noise-canceling AirPods for that since it will be LOUD, and my headset’s cable won’t reach, though I did not thinking to ask if there’s a jack in the nose for that.  I presume there may be, and my Bose A20 headset has bluetooth and noise-canceling.  But we shall see.  Finding out is all part of the adventure and the education.  Of course, in the 1940’s, Bose didn’t exist, noise-canceling didn’t exist, and my dual general aviation headset wouldn’t have worked.  I have to get an adapter to a single-prong.  As I understand it, this plane has a U-174 helicopter setup installed now rather than the military low-inference setup.  Prongs look the same, but are not. 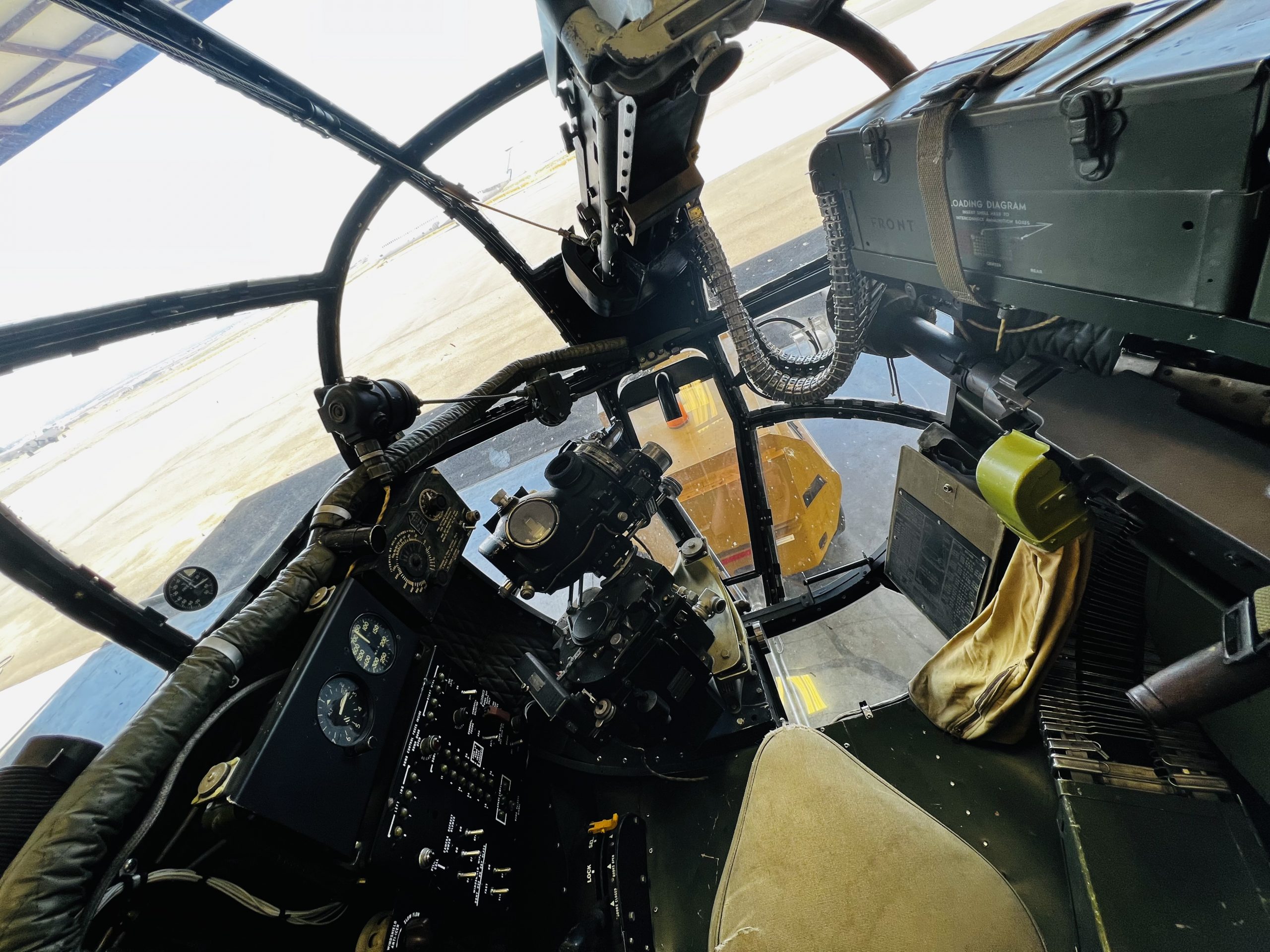 It’s surprisingly cozy in the nose, to be quite honest.  I’m sure it’ll heat up a lot in the sun though.

To get into the tail, you have to climb over the jump seats and crawl through another opening, but on the other side of that, you can stand up and walk to the tail.  I didn’t go back there this time, but according to one of the ladies who has flown on this plane, that’s a cool place to go chill for a while.  And you can bet I have every intention of being all over every inch of this plane, taking photos, asking questions, having to remind myself that I can’t write in every single detail into the books since the only thing worse than a writer not knowing their asses from their elbows…of their noses from their tails…is one who tosses in words just to show she knows them, and the only thing worse than that is a book I tried reading recently where the writer was so clinical in her descriptions that her lack of comprehension nearly made me cry.  The balance takes skill to find, and beta readers who know the topic as well as betas who don’t are helpful in finding that middle-ground.

I’m still stunned that I get to do this.  How insanely amazing it is to have almost all of one’s passions roll into one package like this?  How often does it ever get to happen?  Three months ago as of today, I was still awaiting my first flight lesson.  I got my medical clearance on the 20th of April, and my first lesson on the 25th.  And here I am, anticipating a dream getting to happen.  I’m probably not going to believe it until Thursday.  I’m so used to things not falling through, and when it’s a dream this big, in what feels like no time at all…

And last month, I came into possession of a very rare WASP object, a holy grail to many admirers of WASPs and many collectors of WWII objects….